The Land of Forever (overview)

The “The Land of Forever”(LOF) is the work of creative genius Francis Taylor. Francis is an artist, animator, and storyteller. 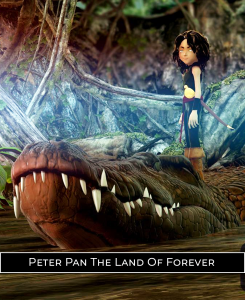 He has effectively created the third installment of the Peter Pan story. Dream Teller Studios LLC. is in development of a full-length CGI animated production of the story he has created with the help of writer Eugene Selassie.

Most of us remember the original story created by J.M. Barrie in the early part of the 1900’s and immortalized by Disney. Upon his death, Barrie left all rights to his story to the Great Ormond Children’s Hospital in London. In the late 1980’s the hospital ran a contest for writers to submit a manuscript for the sequel to Barrie’s story. That contest was won by Geraldine McCaughrean who wrote “Peter Pan in Scarlet” the official accredited sequel to Peter & Wendy. At the end of her story, Captain Hook is left gravely injured and Peter is trapped on a mountaintop, powerless due to the loss of his shadow.  This is where “The Land of Forever” picks up and continues this epic adventure of the master of Neverland, leader of the lost boys, the symbol of eternal youth; Peter Pan.

Our version of the story modernizes Peter from the version we all remember. He is not dressed as a fairy but more like a pirate boy on an adventure. We have taken our new adventure past Wendy and the other Darling children, skipped a generation to focus our attention on Maggie Mannering. Maggie is Wendy’s granddaughter, an all too serious youth and non-believer of the whimsical stories of her ailing grandmother.

At the start of LOF, a dejected Peter is stranded on the shores of Neverland Island unable to fly. Along the way, he encounters an anamorphic slug named Arion L’Escargot.  Arion is a new character with a sarcastic wit. There are a couple glitches along their travels both comical and heroic. They eventually run into some familiar character, Tiger Lily,  an Indian princess from the original story and one of the many young girls enamored by the charismatic Peter. With Tiger Lily’s help and the aid of her father a chieftain, a ceremony is performed to restore Peters shadow and powers. However, the ritual fails.

In the meantime, Peter’s mischievous shadow has been busy. Summoned back on Earth by a Ouija board on Halloween night, by Mariah one of Maggie’s friends. Peter’s shadow creates a passageway to Neverland and sends Maggie, Mariah, and Bibi to Neverland for an adventure of a lifetime. It is during this epic adventure that the pragmatic Maggie learns that youth is a gift not to be wasted.

Meanwhile, there is a new nemesis on the Island emerges in the form of the Black Venetian a vicious warrior brought to Neverland from the realm of ordinary people through a chain of events. With Captain Hook in a weakened condition & missing, the Venetian rises as the leader of Neverland pirates.  The Venetian is out to destroy Neverland and Peter for his own misguided reasons. On one of his raids, he captures Maggie Darling.

Experimenting with pixie dust he finds many new uses including brainwashing. He uses it on Maggie to turn into one of the most vicious and bloodthirsty villains in the history of Neverland.

It is the plight of Peter, the lost boys and Maggie’s friends to rescue her from the Black Venetian and herself.  With the goal of returning her safely to the land of the ordinaries. Along the way, we must vanquish the Black Venetian or risk this dangerous outsiders’ influence on Neverland forever. There are a great many twist and obstacles our hero must face along the way. But like any epic adventure, it is the least you would expect.

This is all the story we are willing to share at the risk of ruining the mystery and excitement of what promises to be one of the most thrilling cinematic adventures of all times. What we will share is the surprise ending will leave you begging for more.

Share This
Visit The Land of Forever Shop Today.
Visit The LOF Shop
Copyright 2020 Dreamteller Studios © - All Rights Reserved
Back To Top
×